Where Are the Battery and Converter in My Camper?

I adore my generator so much.

It’s ideal for a portable, but on occasion I wonder whether my next RV improvement should be an RV with an onboard generator.

Everyone has at least once done it in today’s technologically advanced culture.

You carry your phone outside with you.

About 75% of the battery is still active.

Hours will pass while you are not able to charge it.

As the day goes on, your phone’s battery life gradually declines.

Before you know it, your phone is alerting you that the battery level has fallen to the terrifying 20% level.

You barely make it home and then hastily charge your phone battery before it runs out of power.

Right, it’s not a pleasant sensation.

Imagine for a moment if you were dependent on a battery to power and heat your RV rather than a luxury item like a phone.

You’re in serious danger if that battery dies.

It’s a lot bigger problem than not being able to reply to a friend’s SMS or check social media.

Your journey can be postponed until you can find someone to jump start your car, which might take hours.

It is crucial to fully comprehend the batteries in your RV for this reason.

I’m referring to knowing where to look for it, understanding the sort of battery you have, keeping an eye on it so it doesn’t completely discharge, and charging and maintaining it.

Of course, the converter, which can transmit different signals and voltages like DC to AC and back again, works in tandem with the RV battery.

In this essay, I’ll go into further detail regarding the converter in your car.

Where is the battery located in your camper?

The answer is that it varies! The battery may be located in a number of places in your car, depending on its size and maker.

These comprise the engine compartment as well as the outer compartment and retractable entrance stairs of the vehicle.

Now, a compact battery like an AA is not what you need.

RV batteries are often square or rectangular in form and relatively thick.

They might be maintained in an RV battery bank, as the name suggests.

Such a bank may accommodate many packs of batteries of the same kind.

To provide 12 volts of electricity, for instance, you may place two sets of six-volt batteries in the battery bank.

If you want to use a battery bank, you need use a jumper wire to connect the battery pairs.

This should be easy for you to figure out if you’ve ever had to jump a vehicle.

6 volts? 12 volts? What does everything mean?

The majority of campers will be powered by a 12-volt DC electrical system.

This indicates that both the batteries and the converter operate at 12 volts.

Other times, albeit less often, your camper could have a 120-volt system.

If so, you may use either domestic AC or DC power or shore power to recharge the battery.

Microwaves, coffee machines, and hair dryers may all be run on such a system.

These are nice-to-have extras that are not necessities.

What if your camper’s electrical system is just 12 volts? It’s OK.

For the most part, you should still be able to power your essentials, including:

Naturally, it’s essential that the majority of those accessories and gadgets have 12-volt equivalents.

For instance, your TV and air compressor both need to be 12 volt devices.

Otherwise, it’s likely that your battery won’t be able to power these things.

Some devices, like refrigerators and coffeemakers, may significantly drain a 12-volt battery system of power rapidly.

You may wish to find an alternate source of electricity for your refrigerator than batteries.

Limit your usage of the coffeemaker as much as you can.

#3. Looking Over The Battery

The battery in your camper is a lot more intricate than the one in your smartphone.

It’s more difficult than just plugging it in and seeing the battery % increase.

In reality, unless you have a device known as an RV battery monitor, your battery won’t tell you very much at all.

As they are often created for maritime vehicles like boats, be sure to get one that is intended for RVs.

You may get a more precise readout of your vehicle’s battery % using an RV battery monitor.

It could have a number of lights that indicate when the battery is charged entirely, halfway, and in between.

The readout panel on the monitor may also serve as a reminder that you need to recharge the battery.

You will now need to wait before using your battery monitor when it first arrives.

Be prepared to spend a day or more without your camper’s battery.

This extended 24-plus-hour pause enables the battery monitor to get a more accurate reading of the gravity and temperature, improving accuracy.

How do you interpret the readout that you are viewing? Your battery may often need more time to charge at a lower voltage.

Consider a battery bank with two six-volt batteries that together have a voltage of 12 volts.

How can you tell when the battery needs to be charged?

You examine the voltage reading.

Using the same example, a voltage value of 10.50 indicates that the battery is completely dead and at zero percent.

Here are some more voltage figures to remember:

A completely charged battery’s voltage does, in fact, surpass 12 volts, but that’s OK.

After all, this is a rough estimate, and not all battery monitors will show the same reading to the precise numbers.

It is very obvious when it is time to charge your battery.

Naturally, you don’t want to allow your battery get close to being completely empty since it would put you in a serious bind.

The battery can never again be completely charged.

Make careful to charge the battery when it lowers to half, or 50% and 12.20 volts, to avert that destiny.

It’s time to charge your RV’s batteries once they reach that 50% level.

Why do you do this?

Your converter will be useful in this situation.

We need to speak about the converter now, even though we’ll go into more detail about it later in this post (including where to get oe and the other parts).

You’ll need an electrical outlet and the converter/charger to recharge your batteries.

Your RV may connect into the outlet.

You may change the grid power’s voltage using your converter/charger.

In this scenario, the battery of your camper would get 12 volts of DC electricity from the AC power source.

After that, you allow the battery to charge.

Don’t let the battery charge for an excessive amount of time, just as you would with your smartphone.

You may stop charging the battery after it is charged to 100 percent.

You no longer need to wait for the battery to completely charge when idle.

You should still be able to use appliances as long as the battery doesn’t get too low, but obviously you need be cautious about which ones you choose.

At this time, unless you want to unintentionally blow out the breakers, it’s not really advised that you use the air conditioner or even the refrigerator.

Despite the fact that you are much more experienced with camper batteries, you can’t help but worry what happens to your battery when you put your RV in storage during the off-season.

What a wonderful question.

Your camper battery will undoubtedly expire due to the cold, the idleness, and the lack of charge and maintenance.

Even worse, it may freeze.

If your battery is still functional after thawing, it may not last as long before having to be recharged.

These types of battery life problems are often permanent and call for a replacement.

There are, fortunately, workarounds.

The trailer’s batteries may be removed, and you can keep them with you during the off-season.

You should check the battery’s percentage at least once each month.

When the battery is not consistently used, it will naturally deplete much, much more gradually.

When the battery isn’t in use, you shouldn’t wait until it runs out to charge it.

Instead, let it to fall to at least 80% before charging it.

Your camper battery won’t last forever, no matter how carefully you take care of it.

However, by performing routine maintenance, you may maximize the longevity of the product.

Following are some suggestions for maintenance:

We’ve previously covered a little bit of the converter’s significance.

Just to be clear, you’ll use this to change the voltage of the electricity coming from the plugged-in RV to the one your battery needs.

You are unable to charge your batteries without the converter.

These converters are quite important since they may sometimes be used to power thermostats, refrigerators, vent fans, and lights.

You will need to purchase a converter since the majority of RVs do not come with one.

A deck mount or a distribution panel are your options.

The distribution panel converter is a substantial, oversized object.

When the primary converter breaks or burns out, this often serves as a backup converter.

They have readily available circuit breakers and fuses and are built into the wall.

A deck mount converter is more compact and does not need wall installation.

As an alternative, you may find them under a hatch compartment, behind a cabinet, behind a passenger seat, and many other places.

With this kind of converter, you have a lot of flexibility.

The parts and components will be the same whether you choose a deck mount converter or a distribution panel converter.

In case you need to reset your converter or do any other troubleshooting (which I’ll discuss in the following part), it’s a good idea to get acquainted with these.

An outline of these elements is provided below:

#9. A Few Tips for Troubleshooting Converters

Problems with your converter? Prior to contacting the manufacturer or hiring a professional repairman, make sure to attempt the following troubleshooting techniques:

A battery or a group of batteries are often installed in your camper trailer anywhere within the vehicle.

The air conditioning, television, and lighting that you use every day in your camper are all powered in part by these.

Your camper’s batteries have a limited lifespan.

You’ll want a converter to charge them.

You’ll need to keep a close eye on the battery level between charges to prevent emptying it and reducing its longevity.

It’s also advised that you remove your batteries throughout the winter and store them at home until spring.

When the batteries are not in use, they won’t need to be charged as often, which will help you prevent frozen batteries.

After all, nobody wants to come back to their RV during the off-season and find such a nasty surprise there!

If you find yourself stranded in the middle of nowhere or have to stop for the night due to bad weather, this will be extremely helpful to you. 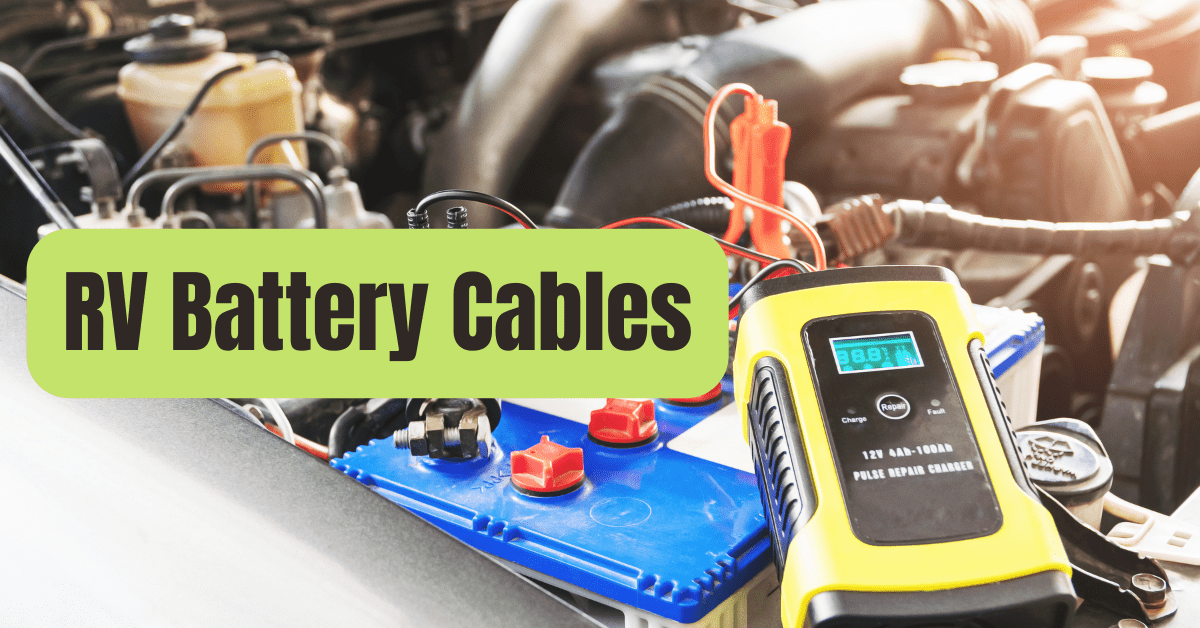 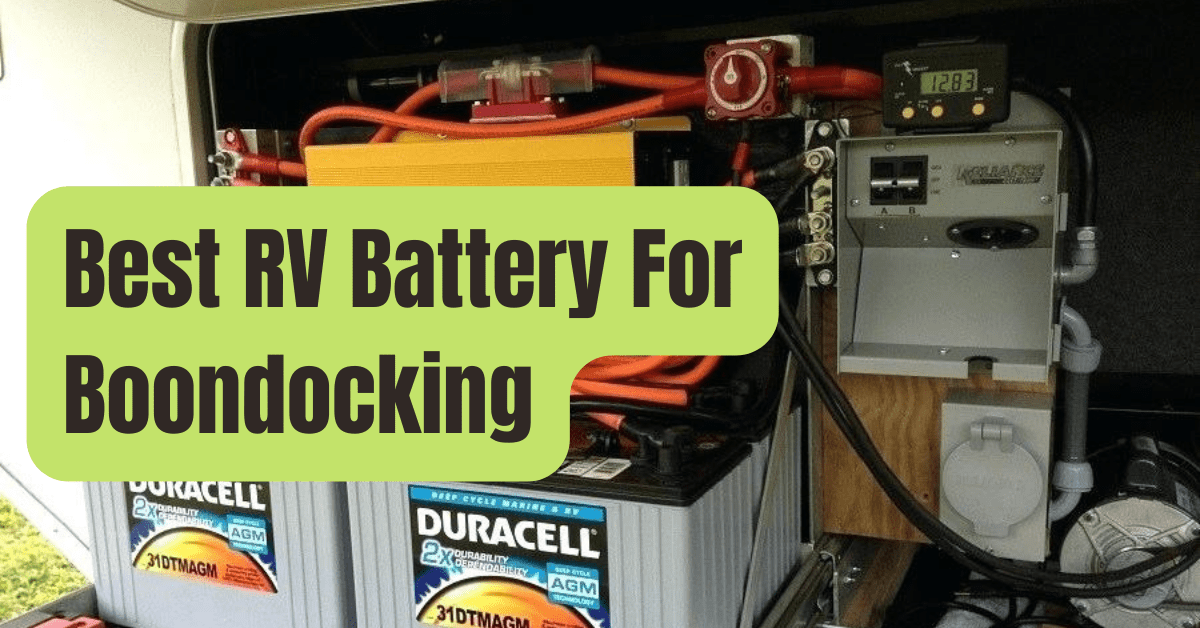 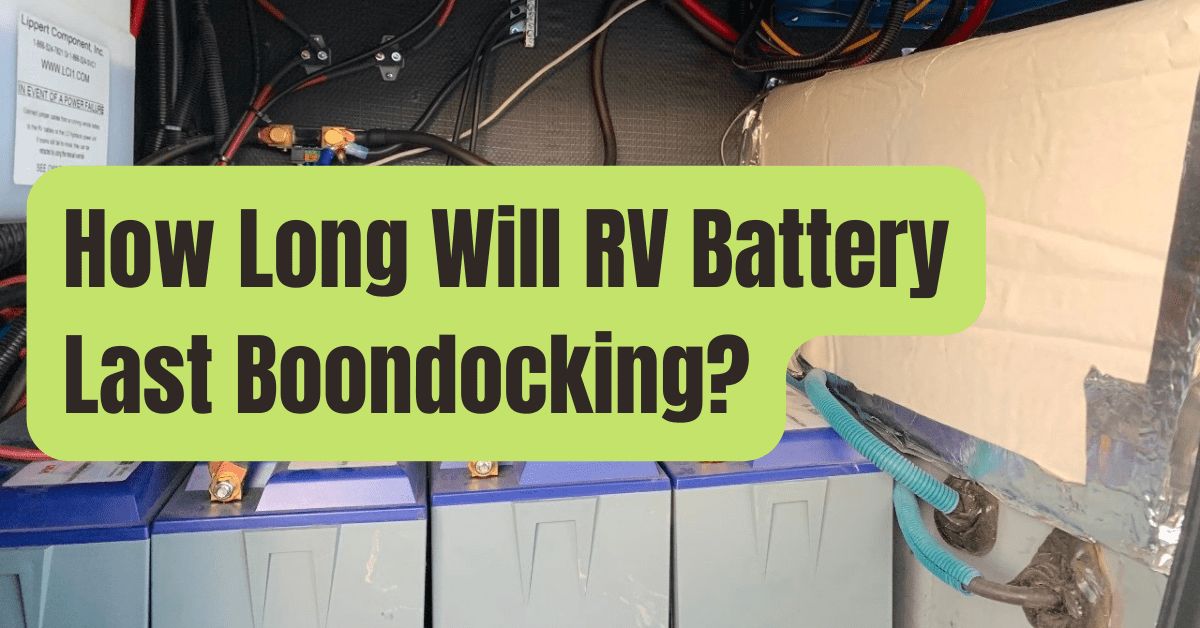 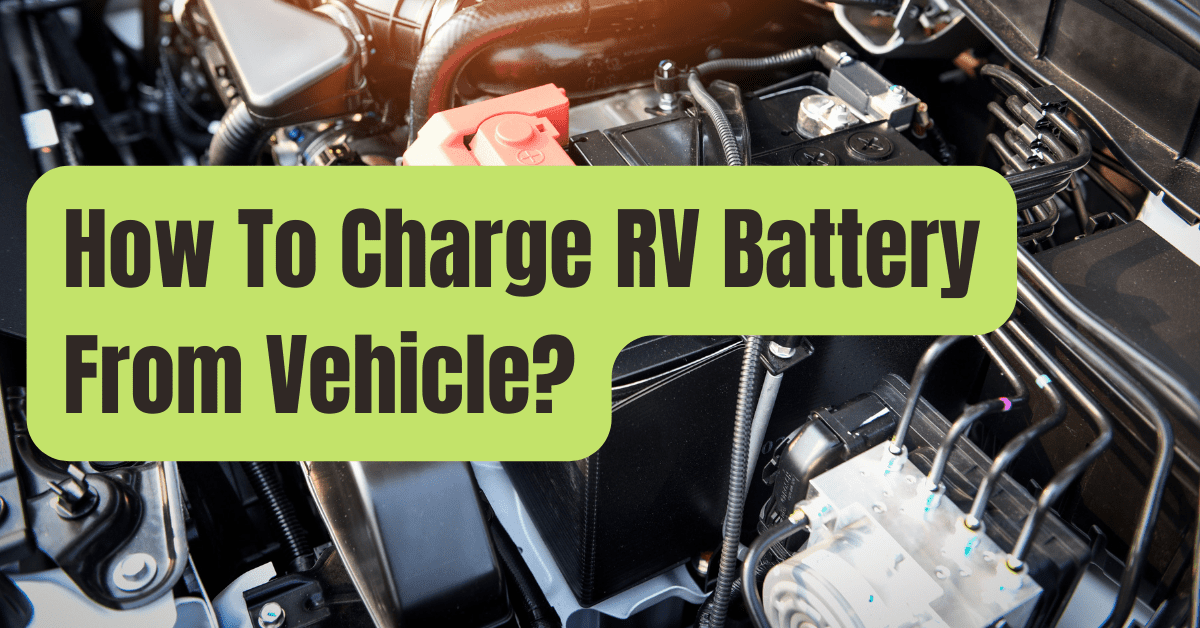 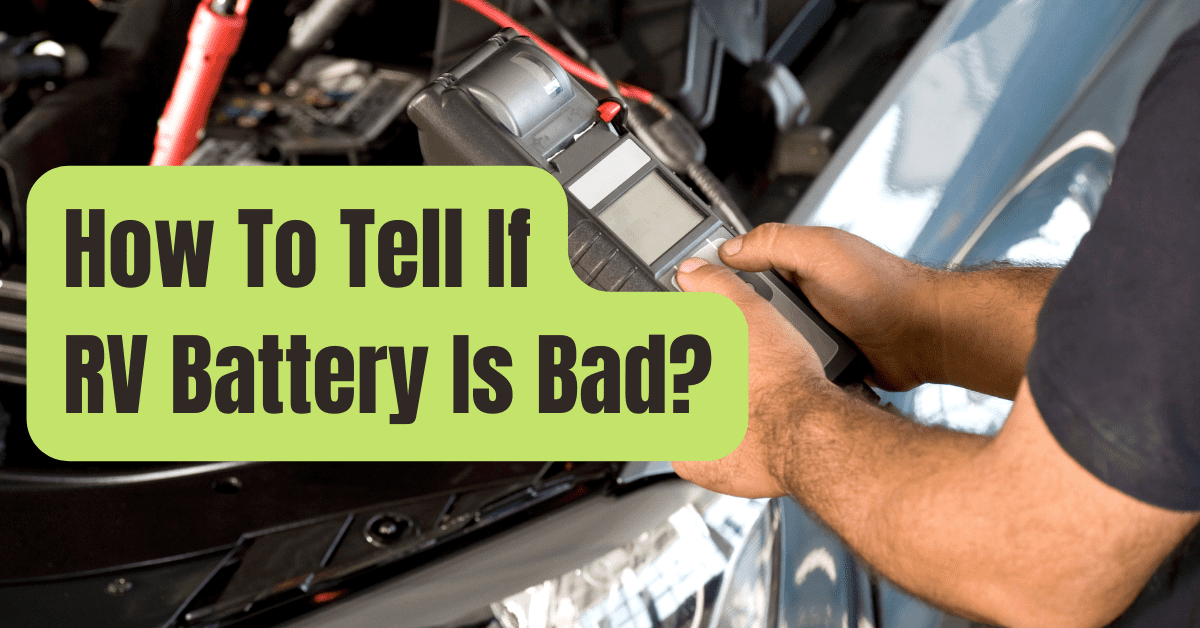 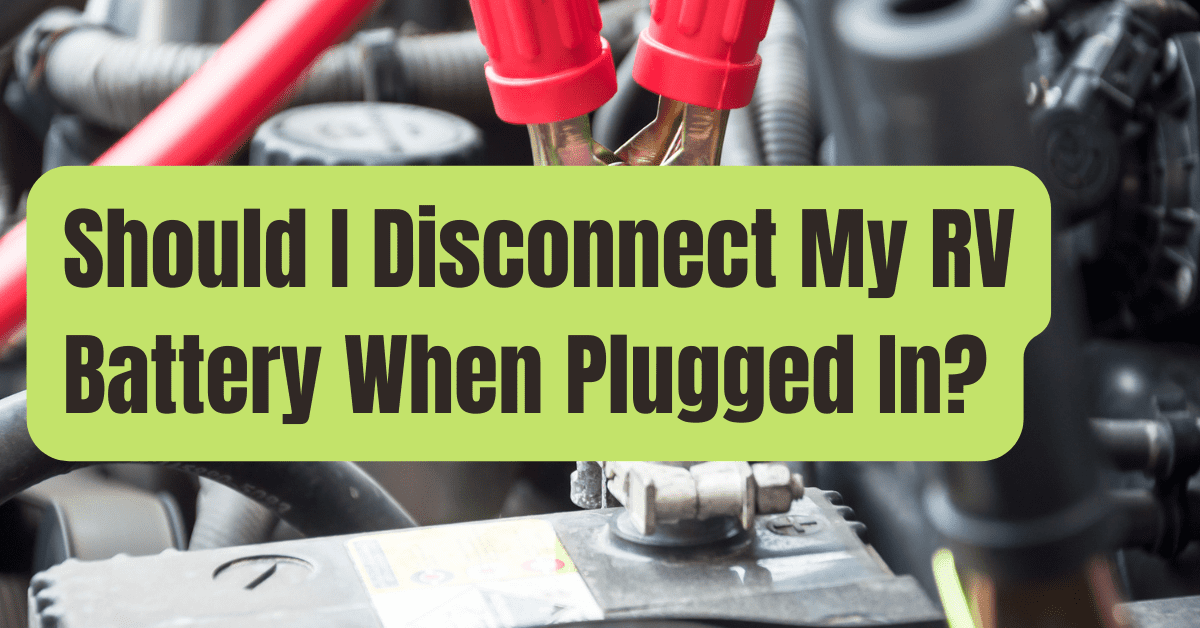