The Future of RV Autotransformers

In 2020, there will be significant modifications to the RV industry’s fire safety.

Specifically RV electrical systems and the use of RV autotransformers.

The NFPA is revising its fire safety regulations to ban the use of autotransformers in recreational vehicles.

Is it necessary to outlaw the RV Autotransformer?

An RV Autotransformer Is What?

Your RV should ideally operate between 114 and 126 volts.

The motors in your electrical appliances may be harmed if you are operating below 108 volts of power.

These appliances will consume more amps when there is low voltage, which may lead to overheating, fires, and early appliance death.

And everyone is aware of how unpredictable campsite electricity can be.

The majority of RV park electrical systems were designed to accommodate smaller RVs and their associated electrical needs.

Not the high-end cars of today with 50 amp hookups.

You could experience brownouts from low voltage due to the rising demands placed on the electrical infrastructure at RV campgrounds.

To bring you within, or at least nearer, the optimal voltage range of 114-126, an RV autotransformer will enhance voltage by 10%.

In order to raise the voltage, it converts amps.

The Hughes Autoformer for 50 amp and 30 amp RVs is a well-liked RV autotransformer.

However, the NFPA is currently revising fire code requirements to prohibit the use of autotransformers.

The NFPA Is What?

The National Fire Protection Association is known as NFPA.

It was founded in 1896 as a nonprofit organization with the goal of promoting fire safety.

They are the group that creates the fire regulations utilized by several governmental organizations, insurance providers, and manufacturers for a range of circumstances, goods, and structures.

These regulations are intended to lessen the likelihood and consequences of fire in your house, place of employment, stadium, and, of course, RV.

The government is not the NFPA.

Despite the fact that they lack any formal authority, their guidelines and suggestions are widely recognized and often immediately integrated by reference or repetition into insurance legislation and requirements.

In essence, whether we realize it or not, the NFPA is responsible for creating the standards that are used by everyone.

“Establishes fire and life safety standards for recreational vehicles,” according to Standard 1192.

Standard 1192 covers a variety of subjects, including:

You get the point, I suppose.

The focus of Standard 1192 is the safety of your RV and all of its systems.

In the meanwhile, Standard 1194 controls the layout of RV campsites.

With Autotransformers, What Is Changing?

Standards 1192 and 1994 are presently undergoing modification by the NFPA.

Because autotransformers pose a risk to the electrical systems of RV campgrounds, the NFPA’s RV committee is considering* outlawing them.

* The restriction on the autotransformers wasn’t complete when it was initially drafted.

It now seems that the prohibition against autotransformers at RV campsites is included in the final standard.

The usage of autotransformers puts the surrounding electrical infrastructure under significant extra stress that is not taken into account in the load estimations in this section.

Due to the strain autotransformers have on the campground’s whole electrical system, several campsites already prohibit their usage.

However, if the NFPA proposal is approved, all campsites that adhere to the rules would be required to stop using them.

It is probably necessary for local code enforcement or their insurance firms.

Keep in mind that many municipal fire rules and insurance requirements are based on NFPA standards.

What Is the Risk of Fire?

I now understand that an RV autotransformer transforms amps to volts and safeguards the RV appliances in low voltage conditions.

That sounds fantastic, but where is the fire hazard?

In your RV, wouldn’t the autotransformer really lessen the danger of fire? After all, when the voltage is low, it will convert large amps to little voltages, cooling the wires in your RV.

The electrical grid at the campsite is the issue.

This was stated by the NFPA in the cited quotation.

Although you may be both, I’m not an electrical engineer; I’m an RVer.

And yes, I can see that there may be a concern as electrical problems can result in a fire.

But I failed to grasp it.

I then turned to my father.

Yes, unlike me, he is a real engineer.

He described it to me as follows:

On the electrical side of the campsite, there is a fire danger.

In essence, they will use more amps when several RVs utilize an autotransformer.

This indicates that the pedestal’s power supply cables at your location will get hot since high amps equal heat.

Wire failure and potential fire might come from this. About the campsite.

The power pedestal where you are connected in is where fires will most likely start.

There will be a straight path from the fire to your RV as a result.

I also turned to Mike Sokol, a pro in RV electrical systems.

If enough autotransformers are used at once, according to him, the chance of a brownout in the RV park is high.

If you are utilizing an autotransformer, you can also burn up your power cable.

They refer to their design as the Autoformer.

Hughes has said that they are contesting the modifications to the Standards that would prohibit the use of autotransformers in a number of letters that have been posted by users in different forums and in an email with RV Tailgate Life.

Hughes contends that the move is being pushed by Surge Guard, a rival manufacturer of RV electrical supplies, the head of the standards review group, and a KOA official.

According to Hughes, KOA does not want to “explain to its consumers why the customer with the Hughes Autoformer still is blazing bright and is cool as a cucumber while everyone else is having a brown out.

The park management would rather that everyone suffer equally (and silently) rather than having to explain why certain RVs are still functional.

To some degree, Hughes is right.

But it also applies to RV owners and RV makers.

In conclusion, the electrical systems at campgrounds have not been created or updated to accommodate the contemporary RV.

Consider this: the majority of RV parks are dated.

They were designed to accommodate 30 amp RVs with maybe one air conditioner.

The RVs may now be equipped with three air conditioners, a microwave, a hair dryer, and all the other extras that use electricity.

There, it is presumpted that not all of the dryers will be in use simultaneously.

However, based on our personal knowledge, we can say that in RV campsites, this is not the case.

We are probably all using the maximum 30 or 50 amps from the pedestal when RV sites are crowded.

We have many air conditioners going, along with dryers, convection ovens, and anything else that uses power.

When RV campsites were created, this was not the case.

At least the ones from 20, 30, or 40 years ago were built with minimum electricity consumption in mind.

We need to plan RV campsites such that they are always utilized to full capacity, unlike those apartment complexes or dormitories.

That is a significant departure from previous designs for campground electrical.

It will cost a lot of money to improve the electrical system at the RV campsite.

We also know that campsites won’t take such action until it is really necessary.

We wouldn’t need an autotransformer in any case if the campsites made this investment and upgraded their electrical infrastructure.

Additionally, that would render the Hughes Autoformer (or any other RV autotransformer) unnecessary.

What is the appropriate response in the interim, or in the absence of that camping investment? Do persons using these things put everyone and the campsite at danger of fire?

The NFPA, a group dedicated to fire safety, is leaning toward realism.

There is a fire risk since it takes more amps to convert to volts.

It would be exceedingly difficult to restrict their usage to a small number of RVers at once, thus it is more practical to outlaw them completely.

The problem with Hughes is as follows.

Keeping this product accessible to consumers is certainly in their self-interest.

After all, they are asking a high fee for them.

I don’t like it when people make the accusation that others are promoting a change out of self-interest.

If you’re going to make that claim, you have to provide genuine justification for why their ideas are incorrect rather than only making allegations.

Hughes should at the very least admit their own self-interest in this situation.

What’s all the fuss and controversy about if they then say that their product isn’t even prohibited by this plan since it isn’t an autotransformer? Why do they worry if it’s not prohibited? Why would they need to challenge this ruling or get the prohibition lifted?

Having Everyone’s Best Interest in Mind

I’m leaning toward everyone’s safety at this point. The bigger picture.

Furthermore, it’s not like we don’t have additional technologies to safeguard our recreational vehicles from low voltage scenarios.

Let’s discover a real remedy rather than argue about this symptom.

Finding a temporary fix that safeguards the majority of people rather than just a select few is necessary in the meantime.

And if doing so means turning off RV systems while they are operating excessively in a campsite, then be it.

I understand that not everyone has the means to purchase a great RV and improvements, but I do.

RV autotransformers will be prohibited under the 2020 Code.

As a result, I am unable to and will not advise you to purchase a product that would violate the fire code.

especially not one that has such a high price.

That is not a wise way to spend your money.

Because even if it isn’t the “law” at the moment, it will soon become the norm when state and municipal laws, as well as insurance rules and criteria, catch up.

As it will take time for the prohibition to filter down via the different governments (mainly state and municipal governments) and insurance firms to the campsite and therefore the campers, it may not be implemented until 2020.

What can you do to safeguard your investment and the electrical equipment in your RV given that RV autotransformers may soon be banned?

A surge protector for electricity management systems should be owned.

Surges, over and under voltage protection, miswired pedestals, and other typical electrical issues are all things that an EMS device will guard against.

However, they will stop operations so you don’t harm your appliances’ motors.

If I Already Have an Autotransformer, What Happens?

It goes without saying that I would never advise you to violate the fire code for safety or legal reasons.

And not even with a wink, wink, I don’t advise doing it.

Don’t get rid of your autotransformer just yet if it’s currently in use in your RV!

You’ve put money into it.

And they aren’t yet prohibited.

They are still usable for the time being.

Additionally, you should keep an eye out for updates on the continued usage of autotransformers.

Perhaps Hughes will succeed in their appeal, and in 2023 the standards will be modified to permit their usage.

You must cease utilizing the autotransformers once the ban is in effect.

Purchase an EMS system that will turn your system off if the power falls. 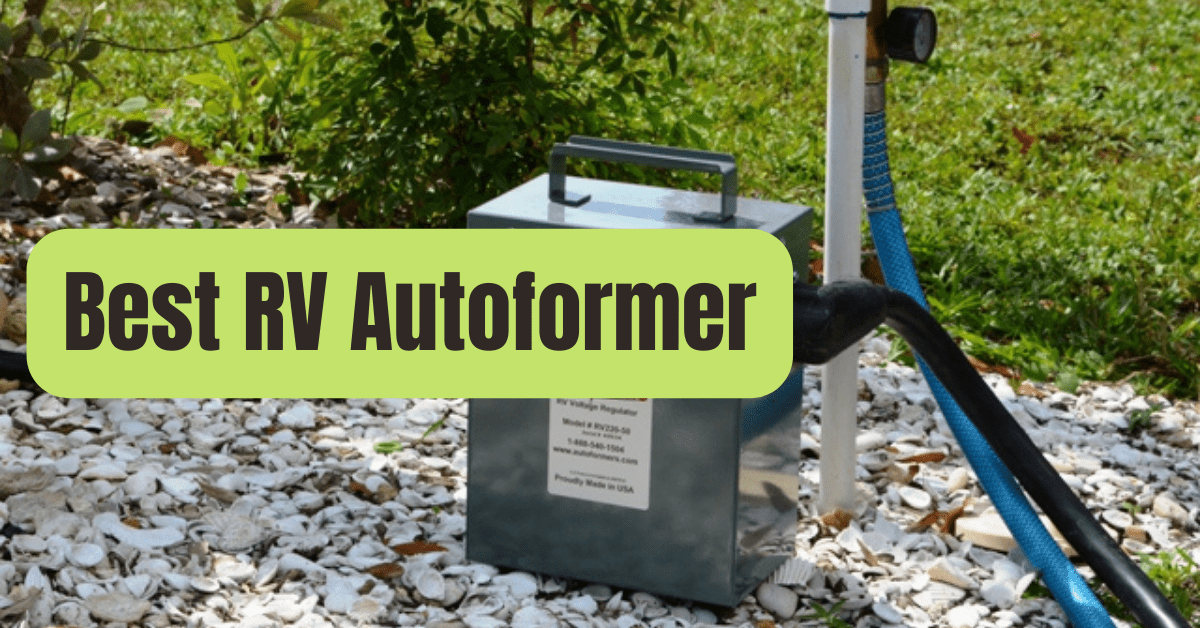